The skydivers have just completed their training, their 16th round at Gua Damai Extreme Park. Attending the BASE jump training were Hizam, Azwan, Arab and Pak Non. They trained consistently to gain more self confidence while sharpening their skills and techniques.

We are confident that the SkyRaiders Team will be the champions of the 2012 Accuracy Jump, to be held here, with the close cooperation of the Selangor Tourism.
Posted by Kaiygin at 00:22 No comments:

RANGERS TROOPED AT GUA DAMAI TO SCALE THE ROCKS 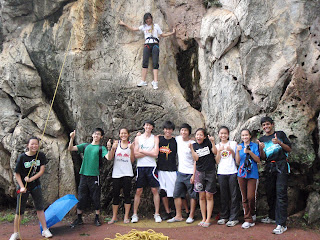 On March 3rd, a group of  “Rangers Group” from Petaling Jaya completed their “Rock Climbing Stage 1. Wira Adventure Consultant took the task as course instructors had 11 participants.  The guests of Gua Damai, Eric and Jonathan who are Rangers themselves led their team through the course successfully.

The stage 1 rock climbing course began with equipment familiarization & utilization , tying knots and belaying.
After a lunch break, they carried on with practicals on belaying and climbing calls.
4 climbing routes were set-up for the participant to practice their belaying techniques and climbing lesson.

Though it rained in the afternoon, it did not stop the Rangers from carrying on. However, it poured dogs and cats a while later causing the session to halt due to safety precaution.

Certificates will be sent to those who pass, a week after the course.
Congratulations Rangers !  Do come again and support rock climbing.
Posted by Kaiygin at 11:59 No comments:

A new Toilet will be built next to the "Bouldering Wall" of Gua Damai. Hooray!

Majlis Perbandaran Selayang, the local municipal council is heading the Phase 1 of upgrading Gua Damai Extreme Park. Soon, there will be more facilities available to the public. We hope to see Phase 2 to be carried out within next year.

Work started on 28th February and is expected to complete by end of April 2012.

Gua Damai Extreme Park will have a new gazebo for picnickers and climbers to gaze at the rock climbers.
The 50 metres of quality "rubber mat" walkway. and will be along soon with bolting more new routes at this area. This is just next to the playground.
Posted by Kaiygin at 09:47 No comments: